Remembering in the capital.

As my learning journey here in Ontario begins, I have left the wonderful home of my hosts Dave and Simone, and headed for Ottawa in time to attend the Remembrance Day ceremonies in our nation’s capital, Ottawa. This journey is as much about learning new skills as it is about understanding what it is to be Canadian, and I feel that spending time in this part of the country is essential to achieving a more complete understanding of the latter.

In my youth, and as a member of an Air Cadets squadron I participated in more than a few wreath laying ceremonies. Back then we unquestioningly donned woolen socks, long sweaters and trench coats to parade in frigid temperatures at a variety of cenotaphs and war memorials to honour our fallen soldiers. At the time, it seemed a tiny sacrifice in comparison to the one we were saluting.

Since those days, I’ve seen much more of the world, and acquired what I hope is a more complete understanding of how the world operates. It’s also my hope that I’ve developed a bit more wisdom, and the capability to think for myself.  I’ve long struggled with the oft repeated message “lest we forget” and with every year that passes my frustration grows.  My hope with attending the ceremony here was to connect with what it means to Canadians, or Canadians in the capital, or even just what it means. I went with an open mind.

I watched as men, women and an assortment of teenagers in pointy hats, and fuzzy hats, and circular hats, and floppy hats all marched past me.  I listened to the conversation of college students, home makers, and retired military personnel that surrounded me in the crowd.  We all watched as dignitaries showed up for their duties, but it wasn’t until the parade of veterans arrived that I realized how empty these words we utter so repeatedly really are.

I grew up in a time when the number of WWI & II veterans was dwindling and Korean war vets were also in short supply; Cypress was but a textbook memory.  Every year of parade saw less veterans and smaller ceremonies. It was almost a mark of pride that we had none to replace them as they died of old age.  What shocked me with the Ottawa parade was the number of young veterans present. As I watched them march past, the realization that we have indeed ignored the message hit me full-force.  We here in Canada (aided by our international partners no doubt) have come up with increasingly effective and stupid ways of wasting human life, destroying families and muddying our name internationally.

In my criticism, I never want to undermine the efforts, and the legitimate sacrifices that our military personnel have all made in their various deployments, but I do question the reason for most deployments in recent history. I’ve always believed that military should primarily be a defence force, and as a Canadian I’ve sat back and watched our military be converted to an international aggressive police force as a result of political posturing.  I do have great hopes for our new government, and a new era of peaceful international behaviour. Time will tell whether this will change.

With that, I shall step down from my soap box, and share some images of the day’s activities. 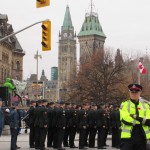 The people keeping us safe today.   The real heroes of the day were really the paramedics, who saved countless soldiers from the inevitable consequences of standing perfectly still for long periods of time.  Those who haven’t tried it, ought to before judging. Without practice, it’s an incredibly difficult task.

Also, the snipers.  Probably more there for the Prime Minister than for us as spectators.

Ottawa Paramedics, the heroes of the day. Veteran service dogs were well represented in the crowd today too.

And a few shots of the tomb of the unknown soldier, surrounded by onlookers laying poppies.  The wreaths were laid at the base of an enormous stone and cast sculpture depicting our troops charging in to battle.

The crowd gathers to lay poppies on the tomb of the unknown soldier, Ottawa, Canada The crowd gathers to lay poppies on the tomb of the unknown soldier, Ottawa, Canada 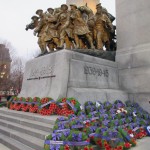 On the lighter side, I caught my first glimpse and took a tour of our Parliament building today: The Parliament Building in Ottawa, Canada

And had my first ever beaver tail. Yes, they’re delicious, and no, I’m not going to share.

A cinnamon and sugar beaver tail. The classic, and a very Canadian experience.

Overall, it was an interesting day spent surrounded by a people united.  I’ve not managed to get any closer to reconciling my feelings on the ceremony but I’ve added another experience in my quest to understand what this place is all about.