So, a little re-cap-over-lap:   Upon Smoky Joe’s recommendation, I’d traveled down in to the Shawnee National Forest to head up to High Knob to watch the sunset.   As I cruised through the winding forest road, I was struck by the sheer beauty of the tree lined tarmac. After having traveled through thousands of Kilometers of flat and rolling prairie, I’d arrived somewhere familiar, serene and very at-home.

Pulling in to High Knob, which I’d thought was just a viewpoint, I realized it was actually a campground catering to horseback riders, and situated with prime access to some of the best horseback riding trails in all of Shawnee.  As I rolled through the grounds, I was immediately impressed with the numerous themed outbuildings that dotted the property and mostly with the serenity of the whole place.  Save the intermittent whinny of the stabled horses, the campground was silent..

It was an easy decision to camp there for the night (after all, I’d hauled a tent down this far) but as I spoke with JoJo, the owner of the camp, she offered a couple of even better options.  At High Knob, in addition to camping, it is possible to sleep in a communal bunk house or even in a private cabin.  I chose the bunk house (as it happened I was the only occupant–it’s usually used by hunters, and, well, this isn’t hunting season). The accommodation is rustic, but perfect for my night’s stay and after moving in I headed to the top of the hill to catch sunset.

After a good night of sleep, and a rather late ten o’clock start, I wandered in to the general store where I found JoJo minding the shop..   Rather than just nipping in for a quick coffee and hitting the road, we ended up chatting for the better part of a couple of hours..   After talking business, mules vs. horses, customer service, travel and culture among other things, JoJo shared a bit more about the area, and the history of High Knob campground. I was thoroughly impressed with her genuine concern for ‘her campers’  their horses, and the areas around High Knob.  Were I able to get here more readily, I’d seriously consider getting myself on the waiting list for one of the few permanent camp spots that come available each year.  Well, that and I don’t have horses..

Incidentally, according to JoJo, there are mule people and there are horse people (much like dog and cat people).  And, as it turns out, mules are actually incredibly intelligent and have a high self preservation instinct (which is helpful if you’re trying to usher the beast through territory that may not be best for the health of either of ya’s)..  The things you learn on the road! :)

Anyway, it’s taken ages to get this post up so I’ll fire a few photos up and a quick video for your perusal! :) 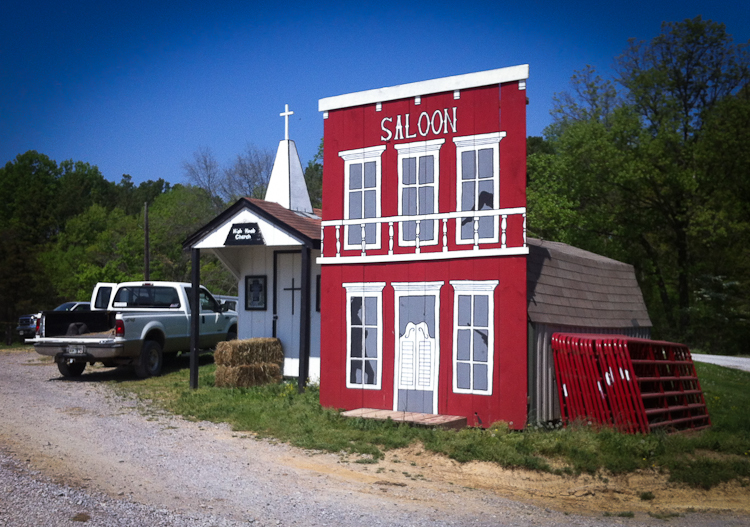 Jay, you’re one of the few people that’ll appreciate the irony of this..  I managed to dump the bike while I was loading it..  Soft ground, the fairing-saver just dug in.. :)  Rookie mistake.

JoJo sent me on my way with a can of her favourite Soda Pop (Red Faygo), and a package of mini-doughnuts, and a direct order to visit the Rocks of the Gods a few miles away from the campground. Which I did, and I’m pleased to have done.. It was really spectacular scenery and I felt it fitting to drink my Faygo right there with a toast to JoJo!  Thanks Lady! :)

The ride to Nashville was pretty uneventful after all of this, but enjoyable nonetheless!

[PostEdit] Actually one thing about the ride strikes me as noteworthy.. Somehow, the southwestern corner of Kentucky smelled exactly like Grape Soda. I don’t know what it was that caused the delicious aroma, but I shall forever more associate Grape pop with Kentucky..

Your map Sirs and Madams: